After seeing a few sources of inspiration online (here & here) & realizing I had a place for one of my own, I decided to make my own "vintage" bus roll. I couldn't find any sources online for how to make my own (in the style that I liked) & was tempted to have one printed for me, but just felt like I wanted to make it myself...even if it would take 5 hours (eek!). :P So here's how I did it! 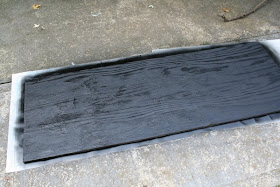 I had Kenton cut an extra piece of ply wood to my specified dimensions (20"x55") & then I spray painted it black. 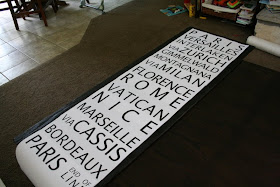 I also took advantage of his access to a copy machine & 11"x17" paper at work & had him print out my city names. I did all of the formatting on Adobe InDesign & chose Lucida as my font. 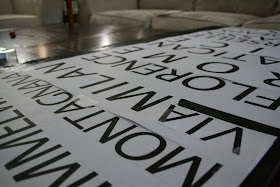 I taped all of the pages together & moved words around as needed, since I'm not all that savvy with InDesign (I wanted "VIA" to be lined up with the top of the word instead of the bottom of the word). 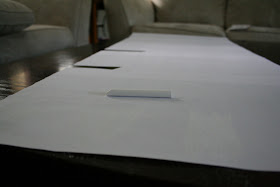 Next, I used white chalk (colored chalk would have been better) & covered the backside of the words with a nice layer. 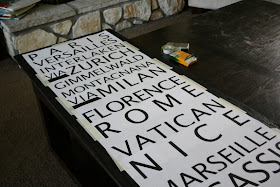 Then I laid that whole thing down & taped it in place. I traced the words using a colored pencil (anything would work, but it's what I had on hand), peeking a tiny bit along to way to make sure it was leaving a chalk outline on the board. 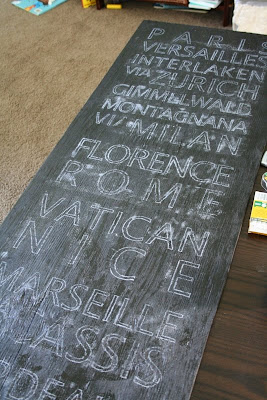 I was so relieved to see this when I lifted the papers off! Now for the detail work. :) 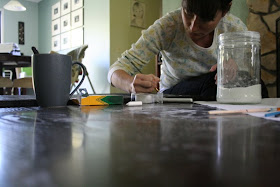 Using some extra interior white paint that I had in the garage, I filled in the outlined city names. 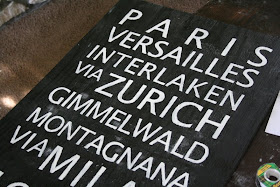 The chalk stayed in place really well & didn't rub off instantly when I touched it. I was afraid it would just brush away, but it held up perfectly! 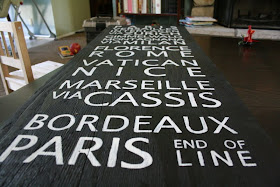 First coat!
I ended up going over the words again with a second coat (which took much less time) because the black showed through a little more than I wanted. 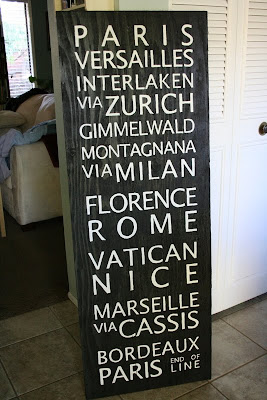 The list is the order in which Kenton & I traveled through Europe the summer before we got married. I didn't include every city (some were left out intentionally, some by accident) but I'm mostly happy with the results. There are some things that bother me (of course) but...c'est la vie! 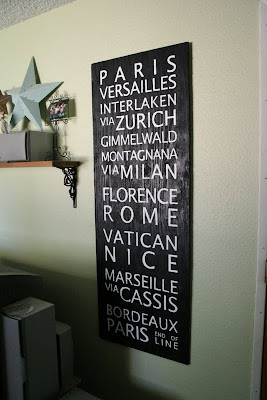 Hanging in place, a little blocked by a shadow...but otherwise, pretty much the look I was going for! :)

I'm sharing this on The Shabby Nest! Check it out for lots of frugal inspiration!
Katrina Henry at 3:30 PM